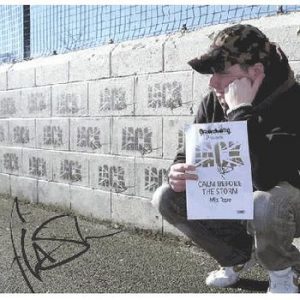 “This mixtape I released in 2005 at the ripe old age of 18. I had a few pressed on CD, we sold them through a couple independant retailers and mostly hand to hand.
Now it is not available anywhere. If you do manage to get a CD of it anywhere or anyone copies you one. It is a mixtape so the tracks are mixed, chopped and cut. So HERE is the only place where ALL the tracks exists in their entirety!!
In my eyes, this was a massive step in learning my craft. My first proper CD pressing, my first project which I organised, mixed, oversaw and wrote. Most people wont know it existed.
Someone had uploaded a few tracks from it on youtube, and whilst I was uploading some new music onto youtube I came across it and thought “shit ye, this had some joints on it!!!” So now its yours to enjoy as well… ” – Jack’s Bandcamp

What do you think of Album/E.P.: The Calm Before The Storm Mixtape?