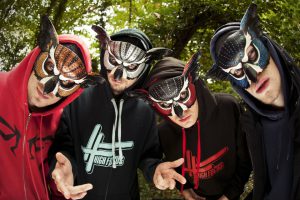 Their anticipated follow-up album “Natural Order” also drew acclaim not least due to the fact that through Leaf Dog’s beatmaking connections, a collaboration was secured with the might DJ Premier.

The Four Owls – Be Free

The Four Owls ( Feat. Jam Baxter) – Life In The Balance

The Four Owls (Feat. Dirty Dike) – Much Too Much