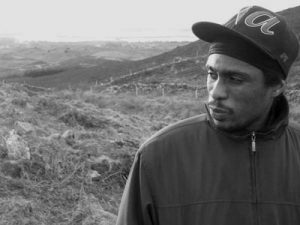 Kashmere, (aka Vulcan aka the Iguana Man aka Vadertron aka Galaktus aka…), is a veteran emcee and producer who delivers a uniquely focussed brand of hip hop music. He’s featured on more than thirty commercial available releases and has toured extensively throughout the united kingdom and continental Europe, building a virus-like following in the process! With musical influences ranging from Dave Brubeck to MF Doom Kashmere’s work rate and collaborations over the years, (Ghost / Jehst / Verb T / Low Life Records / LG/ DJ IQ – Professor Green), alongside an intensely addictive live performance have made him quickly establish himself as one of the most charismatic and accomplished emcees yet to have emerged from the UK. Kashmere’s latest release is ‘Galaktus: Power Cosmic’ on Boot Records, a collaboration with producers Zygote & Jazz T, based on their mutual love of comic books and all things Sci-Fi. Jazz & Zy dug deep in their crates for this project, forging a batch of beats that all have a similar outlandish feel and a consistency that makes the album flow coherently. In addition to ‘Galaktus’, Kashmere is also working on a project for YNR entitled ‘Kingdom of Fear’, a concept album saluting the life, work and vices of Dr. Hunter S. Thompson. Entirely produced and written on the spot with producer Jehst, the two took a typically Gonzo approach to the album, churning out beats and bars with a vulgar disregard for refinement.
– Description from british-rap.com

What do you think of Artist: Kashmere?