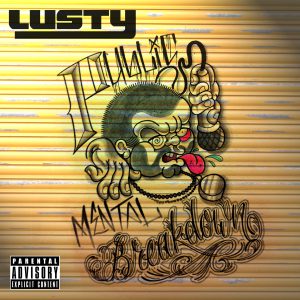 This one’s for everyone who is out in the sticks. Lusty is back with Album number 6, ‘Public Mental Breakdown’. A veteran in the game with such a varied musical history, Lusty is not afraid to touch on any topic. Touch, though, would be putting it lightly; he routinely takes a south western sledgehammer to all sorts of controversial themes and smashes his rusting Massey Ferguson right through them. This latest release sees Lusty’s solo return and first old-school hip hop outing, with acapella bars, big beats and a bag full of hornets covered in razorblades.

The album drops in with ‘Midlife Crisis’ and Lusty serves up a lyrical entrée to the album ahead on a bed of crisp-sample, celestial string salad with a freshly buttered boom-bap. Part salute, part statement, this track only gives you a glimpse into what is yet to come. ‘Country Bumpkin’ (see video below) then sneaks up on you and aggresses your ears with a sub-atomic bang of a beat, brass and cymbals going mad all over the place. Gracing these haunting tones; Lusty’s prose takes you up close and personal with the darker side of rural living. Literally any countryside preconceptions you may have had will be amplified, chewed up and spat rather aggressively back towards your mug.

‘Hip Hop Time Machine’ acts as an audio biopic depicting Lusty’s story so far; the influences, the inspiration for the album and the idols. The man supported London Posse, was hit hard by the economic disaster of the late 80’s and pays gentle respect to those 90’s heavyweights that helped him through. It’s his hip hop heritage spanning decades. (sorry Lusty!)

Literally every cultural phenomenon for the last decade is ripped apart in ‘The Jeremy Vile Show’. But here at HHIE headquarters the favourite right now has to be ‘Bad Places’ (again, video below). A new video for this track has been dropped and just took it up a notch, though it has seemingly nothing to do with the lyrics – it’s just nuts. Beat and film do happen to go exceptionally well together mind you.

We have been digging this album more and more on a daily basis, the supreme old school vibe of both the beats and the bars are the product of full on musical immersion. Lusty may not immediately suit all tastes with his choice of subject matter or his flow but there is no doubting his ability. It was released on the 4th March but I decided to mull this one over a bit. I am glad I did. Available for free download from alexlusty.com this is not to be missed. Get it in the collection, and while you are there say hello to the Lusty Ladies.

What do you think of News: Lusty – Public Mental Breakdown?