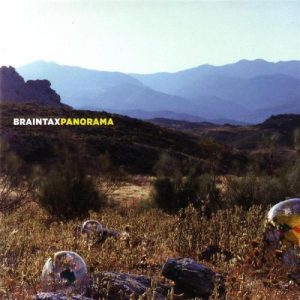 Braintax’s second album from 2006.
Extract from the BBC:
‘Panorama’ is very much an album of our troubled times. Al-Jazeera, the environment, refugees and Blair are all packed into its rhymes. Middle Eastern flavours weave and waft through the production, with political images cutting through; “Oil men, tugging on puppet strings, and the news is skewed, it’s a load of spin”.

Braintax is a grown-up and despite the fact that he’s heavy on critique and low on answers, he looks at our world (hence the title) beyond bling and birds – and that’s not to be under-estimated in today’s Rap scene. The political depth of the lyrics is ‘Panorama’s’ USP.

And the delivery? Brains can flow, he’s got strong feelings and words, but the voice is a little wanting in melody and resonance. When Dubbledge contributes a verse to the Visage sampling ‘Anti-Grey’, it highlights what’s missing from the main protagonist!

The sound is solid, if not inspiring. Beat Butcha of Halal Beats and singer Sammy Jay come through with a feel-good opening track, ‘All I Need’, there’s raw percussion on ‘Good or Bad’ and catchy music from Raw Dog in ‘Syriana Style’.

Sadly absent are some stand-out, grab-you-by-the-heart (or balls) beats. Despite some choice soulful funk sounds it’s missing the edge of a producer like Baby J (who can pick a perfect hook from 100 paces) or the fresh force of a track like Wiley’s ‘Gangstas’. You can’t help but feel some of UK’s freshest sounds are still coming out of the Grime scene, a situation underlined by the fact that three out of the five nominated for the UK trophy in America’s BET Hip Hop Awards are from that background.

What do you think of Album/E.P.: Panorama?