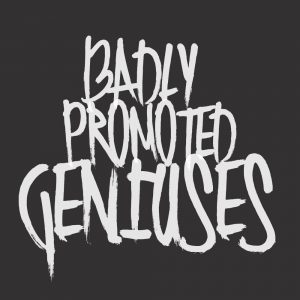 Badly Promoted Geniuses came about as the result of the overactive imaginations of six miscreants with a penchant for Rap Hop. Consisting of; Triple Dot Beast, Baron Samedi, Skrabl, Oozhe, Sofa King and DJ Severe, this gaggle of vagabonds, like a really shabby vagrant version of Voltron or a horrifying NSFW Enid Blyton novella, come together (#NoHomo) to form BPG.

Borne out of a whimsical Facebook group chat and shared love of Rap/Hip Hop/Rap Hop/Hip Rap the sextet (HA! SEX!) came to the conclusion the UK rap scene had lost a lot of, what used to go by the name of ‘fun’. Too much emphasis had come to be placed on videos filmed in dimly lit multi storey carparks to accompany music made by pockmarked 17 year olds talking about the struggle and trappin’. The type of kid that calls their mum ‘Bruv’. While there are certainly some obscenely talented folk floating around their voices have become stymied by the tide of toilet water being spewed out by their ‘contemporaries’.

In the formative chin wags that took place between the 6 members it became clear the groups intent would be to put the emphasis on fun with a view to actually enjoying music. What started as a 3-4 track EP snowballed into what now sits in your hand/CD player/Hard drive/wank sock – a giant 18ft inflatable middle finger placed on a flyover on the hip hop highway that dares anyone to not lean out of the window of their moving rap car and ogle at its majesty while trying not to jack knife and kill everyone passing by in their metaphorical shitheap cars.

‘Sorry Not Sorry’ is the name of that inflatable middle digit. A debut album that slaps the listener in their dangly bits/front bum with a brick and promises more blows to their soft parts if they don’t nod their head until they’ve at least sustained minor whiplash. Beats so dutty you want to wash yourself with a wire brush post listen are provided courtesy of Sofa King, Oozhe, Baron Samedi and DJ Severe with rap words being spat at you like vociferous Hungarian obscenities by the unholy trinity of Triple Dot Beast, Skrabl and Baron Samedi. This shit bangs like Destruction Derby on LSD. 17 tracks of unbridled, unapologetic fuckery that promises to make sweet love to your ear canals and will, in all likelihood, never call you again. No matter how dirty, used and abused you feel after that first listen you will want to go back to ‘Sorry Not Sorry’ like it comes with free Stockholm syndrome. (Stockholm Syndrome sold separately).

What do you think of Artist: Badly Promoted Geniuses?