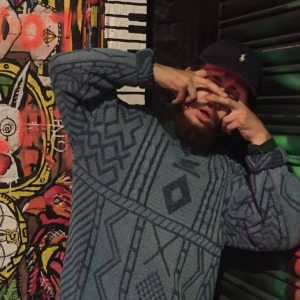 This is how we met Rye Shabby, sweating profusely in a multiple substance induced haze. The watches he was selling from his trench coat were all broken but his sales pitch and general demeanour had the crowd enthralled, it was then we new we were dealing with a special type of human being.

After making £1000 selling a broken Rolex to a man from Felixstowe Rye went on a journey from his home town of Ipswich to Moscow where one snow covered night he met a Kate Moss impersonator, a chance meeting which resulted in a 2 week whirlwind romance spanning 5 cities (as well as Ipswich) and 2 continents. Lyric pad in hand Rye documented his many adventures in the form of poetry.

What do you think of Artist: Rye Shabby?