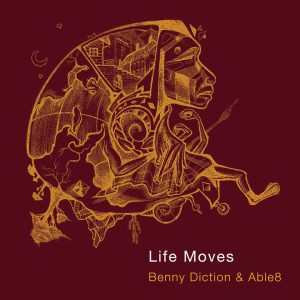 A new release from Boom Bap Professionals, the first in a few months since Oliver Sudden‘s Phenomenal Steaze in December of 2012. This release is an LP by new signing Benny Diction (member of Punning Clan) and Melbourne-based producer Able8. The release is entitled “Life Moves” and features 11 tracks, including some with guest spots from Ro Jista, Cappo, Tony Skank, Myla Vinyl, Biz Bronz, Able8, Julez, Zaman and Gambit.

The album is available for pre-order now (links below). A physical CD weighs in at £7, and a digital version at £5. Both orders will get you an immediate free download of “Over Here”, the first single leaked from the release.

What do you think of News: Benny Diction & Able8 – Life Moves – ORDER NOW?