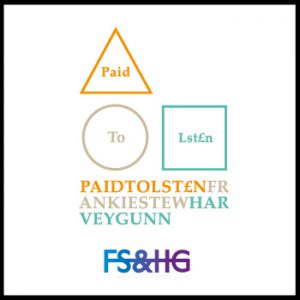 Frankie Stew and Harvey Gunn have teamed up yet again for another dose of just what we ordered. Quick on the tail of their first release, The Gentlemen’s Club, back in April (and after a slight delay that was apologised for with the release of Harvey’s VPVB Beat-Tape) here we have Paid To Listen, a 13 track neatly-tied package delivered directly from Brighton by one of the greatest pairings since bacon and eggs.

Followers of this duo will not be disappointed. Frankie is his usual self: short quips, semi-broken rhyme schemes and that signature minimalistic style that makes his bars both instantly recognisable and surprisingly easy to listen to. While there may be criticisms that some of the content is a little too ‘teenager-y’, overall it is still quite engaging and will leave you searching for more. I’ve said it before and I’ll say it again: this kid has a very bright future ahead of him.

The real standout is the production which is handled entirely by Harvey Gunn; also 17 and also bloody good at what he does. The progression is clearly evident in the 6 months since The Gentlemen’s Club. Whilst carrying the same vibe, the beats in Paid To Listen see Harvey getting a bit more experimental, now drawing on a lot more layers to create a much wider atmosphere. There’s some exquisite sampling that compliments the pace and really ties everything together. I think it’s safe to say that Harvey’s expanding at a rapid rate and will definitely not go unnoticed.

As a package, Paid To Listen is nothing but classy. It’s the kind of music you can picture playing softly in the background while a suited-up clean-cut gentlemen pours himself a scotch. There’s no harsh punchiness, no loudness, shouting or demeaning. It’s all thoughtful prose, tidy beats and colourful metaphors. Crackling open fireplaces at their finest. If your ears have been a little tired lately of the never dying boom-bap wave taking over UK hip hop at the moment, then give this a go. You just might like it.

What do you think of News: Frankie Stew & Harvey Gunn – Paid To Listen – FEATURE?