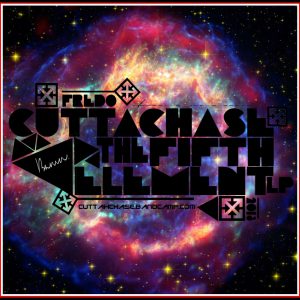 One of the UK’s most understated artists, Cutta Chase, has released a new LP entitled “The Fifth Element LP”, a project produced by long-time collaborator Fredo. Cutta may be understated, but he’s certainly hard-working, intelligent and very talented. Early 2013 saw him put out 3 top notch releases: “Sunshine For The Blind” and two parts of his “Tongue Strung Project”, “Tonguestrung LP” (Part 1) and “Wisdom Teeth” (Part 2) – all of which are amazingly free. Combined with an earlier (but equally great) release in “Random Slang“, Cutta has consistently chipped away at the block to cement himself as a top emcee, producing quality hip hop of a largely chilled and very conscious kind. The beats are invariably mellow, providing a canvas on which Cutta paints images with his soulful words, revealing social commentary, hopes, aspirations and experiences.

With this latest release coming on the cusp of the New Year, Cutta is starting 2014 with a bang. “The Fifth Element” is 8 tracks long, and untypically features other artists, namely Verb T, Frankie Stew and Smoovth.

The LP kicks off with “Wide Eyed Owl (Intro)”, which immediately sees Cutta engage with the listener, and unleash sublime wordplay, stating his musical aims and methods. Combined with the guitar strings and gentle drums, all the adjectives we used in the introduction become evident. Cutta’s cadence is phenomenal, using short sentences to his advantage to provide clarity in his lyrics, flowing excellently with the beat.
There are so many great bars/lines in the intro.


This is that underground sound, but it’s destined to blow, we’re ready to go – cheddar in a sesame roll, it’s that twenty-first century with seventies soul – forever evolved
Wise like a wide-eyed owl, trying to shine bright and find my cloud

“Moonlight Melody” is a positive joint, ever soulful, elevating the listener to astral plains. The words are poetical and you can get lost in them and the mellow beat.


Stand on your moon and gather your stars, channel your art and do what you planned from the start.
Positivity reigns – a not-so-common theme in hip hop, which gives a fresh feel to the track, and the whole LP.

“Drifting” carries a bit of brass and gentle piano keys. It’s Sunday, and I’m suffering a bit from Saturday, so this type of track is doing the trick right now. Cutta enters with his recognisable husky flow and positive outlook. This is the first feature of the LP. Verb T is perhaps the most fitting partner for Cutta Chase. Also known for his laidback style, Verbs is able to marry the beat and give that enviable feeling of making it all seem so easy. If you’re after some head-nodding, soulful stuff, this track may take your vote as favourite. Even if it doesn’t, it’s one you’ll replay.


Logic over gossip, this is Cutta with that conscience, calm chatting, past rapping,this is poetry, Man you know it’s me – passion man, Potent (C)
He said it himself. Cutta is a purveyor of poetry. Yeah, he raps, but there’s depth and feeling in his words, making something deeper. He uses concepts brilliantly (bricks, foundations, building bridges – have a listen). 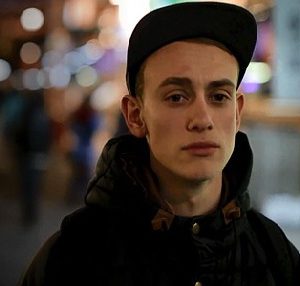 “The Light House” brings us another great choice of collaboration in the voice of Frankie Stew – another artist packing an introspective and relaxed manner on the track. Despite his young age, Frankie displays wisdom in his words, a good match for Cutta’s words and Fredo’s beat. It’s great to hear Frankie talk about how he’s developed as a person – something we can all relate to. We’d love to see more material from these two.

“Lovers Lament” is a track about… love. Soulful music needs a nod to romance, love and all the inbetweeen. Cutta takes the reins alone again, and whether he’s talking to a special someone in particular, or any past lover, the listener will find something to relate to.


If you talk about me now, I hope you say you like me
Cutta’s poetry looks frankly at a break-up, perhaps some time after the event, and he talks about his feelings in his prose. This track is yet another poetical number in Cutta’s repertoire, showcasing frankness and honesty.

If you’ve listened to “Tonguestrung LP”, you’ll have heard a version of the next track “Laws Of Attraction”. Here we have a remix version. It’s not a musical remix, as is common, but rather a lyrical remix, featuring Smoovth, the third and final vocal collaborator of the LP. Cutta rhymes first, with familiar vocal dexterity:


I used to think about the mountain all the time, vision I could climb, and now the mountain’s all mine
Smoovth, out of New York, brings a nice verse to the table, giving vocal variety to the track, and adding to the overall vibe of the LP. It’s great to see a foreign feature on UK material, demonstrating the togetherness of man despite borders and various other differences, proving that creativity is a bonding factor that knows no boundaries.

Closing the project, comes “God Jinxing”, an outro track weighing in at over 6 minutes long. Cutta is alone again, and uses this opportunity to leave a lasting impression on the listener whilst making it clear that there is more to come.

Rightly so, this release is an early benchmark for 2014. Soulful, relaxed, introspective and consistent – if any of those adjectives appeal to you, then “The Fifth Element” should be added to your collection. Cutta has now more than demonstrated his ability to constantly perform well, and we’d like to see more of him over the course of the year. Alongside Fredo, Verb T, Frankie Stew and Smoovth, something great has been created. You can listen to the LP below, and visit Cutta Chase’s Bandcamp to grab this and more material, which comes highly recommended from us. Also, don’t miss out on his YouTube channel for plenty of exclusives and some cheeky Bitter Banter video shorts. Feel free to voice your thoughts in the comments below.

What do you think of News: Cutta Chase & Fredo – The Fifth Element LP – REVIEW?