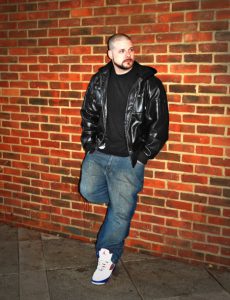 Stealf started life off as a DJ before getting some inheritance money from his Grandpa. He had already decided that he wanted to try something new so he got himself some Denon CD decks and a Vestax mixer and began playing about with some tracks and working on the odd remix. It was at this time that he started to get interested in how beats were made and actually produced. So he then invested in a Boss SP-505 sampler and got started. With that sampler, he created his first ever beat ‘Gun Law’ and before long was hooked. He kept working on the Boss, learning all the basics before eventually getting Reason 3. With Reason he started getting some tracks together and they started to have a more musical feel and started sounding more and more complete. He then upgraded his sampler and got his first MPC… the MPC2000XL. This is where his game changed, and before long he fell in love with the sound of the Akai MPC.﻿

After getting himself a decent turntable he began digging in the crates and started to learn the basics of sampling. From then he brought his own mixing desk and upgraded from the MPC 2000XL to the MPC 2500. He soon got a basic understanding of how to mix down a beat and layering sounds, as well as stepping up his sampling skills. Stealf was born and the beats just came together time after time! ﻿
– From DeFacto Entertainment.

:( We don't have any lyrics from this producer.

What do you think of Producer: Stealf?