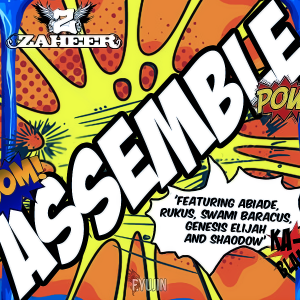 Producer Zaheer drops the track “Assemble” featuring a whole heap of emcees. The track has a recognisable grime theme to it, as do the flows of some of the emcees. There is a taste of the two genres crossing over. The video is nicely filmed, with intro segments to set the scene, followed by straight rapping.
http://www.youtube.com/watch?v=v1oIq298FbQ&hd=1
Let us know in the comments if you’re feeling this track.


See below for the Press Release.

FEATURING (in order of appearance)
ABIADE (@AbiadeMusic)
http://www.abiademusic.com
RUKUS (@RUKADIAH)
http://www.rukdarapper.com
SWAMI BARACUS (@SwamiBaracus)
http://www.swamibaracus.com
GENESIS ELIJAH (@GenesisElijah)
http://www.genesiselijah.net
SHAODOW (@ShaoDowMusic)
http://www.mrshaodow.com
*VIDEO DIRECTED, SHOT AND EDITED BY ESCAPE ROUTE MEDIA (@EscRouteMedia)*
For video enquiries e-mail [email protected]
Press Release
“This summer saw a Zaheer production blasted on BBC Radio 1 in the daytime by the likes of Fearne Cotton, Nick Grimshaw, Scott Mills and others. Now it’s time for the producer to step into the limelight for his craft with a high octane energy track featuring some of the UK scene’s elite.
Taken from his forthcoming EP “Mood Swings”, Zaheer “Assembles” a group of talented artists over one of his gritty hard hitting beats accompanied by an eye-catching and unique comic book themed music video”
Zaheer is a previous BBC Introducing, Friction Introducing and 6 Music Introducing featured musician/producer. His catalogue of work has been featured on BBC Radio 1,, BBC Radio 1Xtra, BBC 6 Music, BBC Asian Network, Kiss and has had productions where the music videos have been aired on Kiss, 4Music, AKA and Brit Asia. He has also produced for a lot of well known and successfully independent artists in the UK and America, with the list forever growing”

Featured Artists
Abiade:
Born Richard Abiade in South East London, ABIADE represents a new wave for the Hip Hop Scene. Having performed alongside the likes of Basement Jaxx, Bruno Mars, Jamie XX, Mike Posner and Akala in preparation for what was a successful release in first Independent Album “The Industry & ME”, ABIADE is set to reignite the UK music scene with a style that is both eclectic and genre redefining.
Rukus:
Midlands based artist renowned for being featured on some of the most iconic and influential songs on the UK urban scene such as “Let It Go” and “Hustle Everyday”, Rukus returns with a rapid fire verse showcasing what brought him to the table. He is currently putting together a brand new mixtape for release in the coming months.
Swami Baracus:
2012 has seen (and heard) Swami’s music aired on Kiss TV, Channel 4 Music, as well as reaching the highlight of BBC Radio 1 daytime playlisting. He performed at T in the Park this summer and will be performing at London’s Freeze Festival main stage, all the while building hype for his new single ‘Hyper’ and mixtape ‘The Recipe’.
Genesis Elijah:
One of the most well known, well respected and hard working veterans in UK Hip Hop having performed all over the world and had extensive coverage by every single noteworthy and relevant platform (BBC Radio, SBTV and everything in between). With an extensive music back catalogue and sales under his belt, Genesis also shot and edited the video to “Assemble” through his own company “Escape Route Media”, which alongside ‘This Is My Hustle’ shows he’s a business entrepreneur of all facets of entertainment.
ShaoDow:
ShaoDow has sold over 11,000 CDs completely independently and previously been featured on Tim Westwood, SBTV for his single with Ghetts and headlined the O2 Academy in Oxford. Currently working his way through the country building the DIY Gang converting people into ShaoDow Warriors one at a time, his latest album ‘Cut The Bullspit’ is out to buy now from iTunes and will be opening for rap legend Tech N9ne at his O2 Islington show.