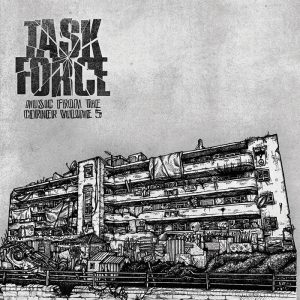 Today has seen the long-awaited release of Music From The Corner Volume 5, the fifth and last installment in the legendary series from Task Force (Chester P & Farma G). Fans of the series have been waiting for Volume 5, since shortly after the release of Volume 4 back in 2006. Peaking interest, and whetting appetites, two teaser tracks were released around a year ago. They were Teacher Teacher and My Last Trip.

On to today, and the 15 track album kicks off with an extended thank you to fans amidst a sample infused piano riff. Shouts to the irreplacable DJ Louis Slipperz too. A minor history of the MFTC trip brings a walk down memory lane. Next, the album kicks off with an unmistakeable Task Force sound. The samples are carefully picked, and each one adds to the authenticity and theme of each track. Storytelling, commentary, anecdotes and packed with vivid imagery, Chess and Farms complement each other as impeccably as ever. Fans will not be disappointed, and newcomers will be more than content with their purchase.

Normally, we’d go into more detail for an album of this quality, status and length, but since heads will have been waiting for this, we’re going to save the details for a while to allow listeners to grab this release, and bump it… all… day… and… night – then again the next day. It suffices to say you won’t turn this off. Guaranteed.

So go grab this now (available in digital and physical format, with merchandise too).

We’ll leave you with a couple of lyric snippets to get the blood pumping.

Influential ain’t the word, let the truth sink, spread it in the news, link your crews, have a few drinks, raise your glass in the air for a new stint, the future is merely a reflection of the blueprint.Chester P
Fuck a promo, poster boy pop artist, you ain’t original life forms you’re dead carcass. Fuck the charts and the target markets, it’s a cold day in hell in these waves in the Arctic.Farma G

What do you think of News: Task Force – Music From The Corner Vol. 5?