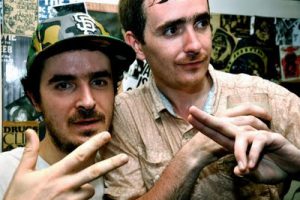 Brothers in arms Chester P (Joey Coombes) and Farma G (Robin Coombes) are Task Force. Based in Highbury, North London, the “Task Force Family” extends to include the likes of Ramson Badbonez and DJ Louis Slipperz. In 1999 “New Mic Order”, the group’s first record was released. It was produced by Mark B and featured Skinnyman and Mr Thing. Task Force have mostly released E.P.s over the years, but their Music From The Corner series, which will soon span halfway to double figures, pack a lot of tracks. This series is being released on Task Force’s own label “Music From The Corner”.

What do you think of Artist: Task Force?