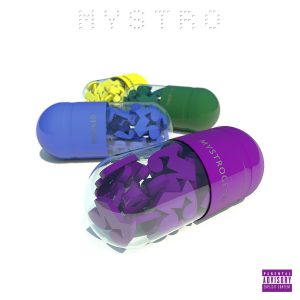 Finally the highly anticipated debut LP ‘MYSTROGEN’ from one of UK’s most prolific entertainers amongst the Hip-Hop elite is ready for the world to digest. Many of us by now should know when it comes to originality this man is in a league of his own as a seasoned lyricist engulfed in undeniable charisma and wit, so while many have come and gone MysDiggi has managed to carve out his own lane. He tours Australia and New Zealand extensively, featured on platinum selling albums, appears on BBC Breakfast, out of the blue, makes viral rap songs for Blackberry and does a yearly UK Rap Up with ease. Not bad for a west London native who’s been independent all through his career. There must be a reason and it’s quite possible you’ll find that in ‘MYSTROGEN’

“It’s like oxygen except you’ll need it a w hole lot more…”
Most drugs are mind altering to some extent… Mystrogen is no different and if you’ve been blessed enough to hear any previous releases like ‘Music Mystro’, ‘F.D.T. EP’ or ‘Digmund Freud’, you’ll know he’s not one to hold back on pushing the boundaries. This is exercised strongly with high-energy tracks like lead single ‘That Rush’ where a rollercoaster of face scrunching production collides with brow raising wordplay and social commentary, the rough yet smooth approach of ‘Hooked’ a metaphorical story of a mans wishes to bring all his vices together one day or the Homeboy Sandman featured ‘What I Want’ where two men break down their ideal lady.

The idea is that you take this drug Mystrogen through the ear canal and enjoy this new journey and with humorous stories like ‘Neighbours’ and the very cleverly written geographical urban folk tale ‘Mystentatious’ it’s fair to say that this LP will capture the minds and imaginations of many confirming why most address him as “a rappers rapper”.

Also including features from Junior Reid, Lloyd Brown plus more and production from Black Einstein, fLako, Show N Prove and Firstman to name a few there’s no question that his promo tour will see MysDiggi hitting new heights.