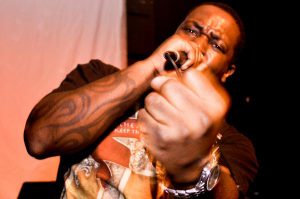 “The artist that is Joker Starr believes UK Hip Hop lacks two essential ingredients – energy and personality. As he possesses boundless amounts of both qualities it is certainly with great anticipation that we accept a rising ‘Starr’ into the mix.

Kebbie Conteh didn’t grow up listening to Hip Hop. His Sierra Leone parents brought him up on Calypso, Soul and Jazz. It wasn’t until September 1998, at the age of 18, that he discovered an interest in Hip Hop that went further than mere consumption. In an effort to develop this unexpected interest he helped to establish an informal rap crew who would entertain themselves with no more than the Hip Hop basics of two turntables and a mic. Soon the interest of some in the group had waned, and those like Kebbie, who wanted to go further and nurture their art became impatient with the apathetic. Members left and the work ethic was transformed. Songs began to develop structures, concepts were crafted and a group name was decided on – Amogee. In January of ’99 another member left, Joker Starr and Dark Angel remained, and the serious work began.

The nickname ‘Joker’ came from a cousin as a result of Kebbie’s relentless clowning around and irrepressible sense of humour. It also speaks in no uncertain terms of his musical style. Joker Starr is not just about witty one-liners and funny scenarios, but that said, it would undoubtedly be a lie to suggest that he wasn’t remarkably good at them. He effortlessly references past and present pop culture turning everyday icons on their heads and to his advantage; from Popeye and Spearmint gum, to R&B singer Jamelia, he pursues a no holds barred policy. Along with the trademark humour, Joker Starr’s music is often very concept driven. The conscious themes are not always obvious, in fact they often surprise emerging out of lyrics that appear to operate on a certain level but then with a deft twist are revealed to go much deeper. His music is never superficial, and often you have to think in 3-D to fully comprehend.

Alongside his commitment to being original – which he expounds as “coming up with something new each time” – is Joker Starr’s dogged determination to move his audience. Whether on stage or in the studio, he wants to inspire his audience to go out and do something – get involved. On stage he’ll scream, throw water, and hurl so much energy at the audience that they can’t help but absorb some of it. In the studio he does the vocal equivalent barely containing himself as he tries to convey his inspired message. “MCing is about expression, it needs to come from you”, Joker Starr speaks in no uncertain terms about his art. He refers to himself as a lyricist, having not fully comprehended the depth of Hip Hop until he began to articulate his own ideas and experiences. A great believer in the importance of individuality, he stopped listening to Hip Hop while “searching” for his style determined to “stay true” to himself and not lose his voice in the multitude of existing voices.

The latter part of the name ‘Joker Starr’ refers to the artist’s personal ambitions in music. With the multitude of skills he enjoys and his personal drive the name is easily a fore warning of where he is going.” – British Hip Hop.co.uk

What do you think of Artist: Joker Starr?