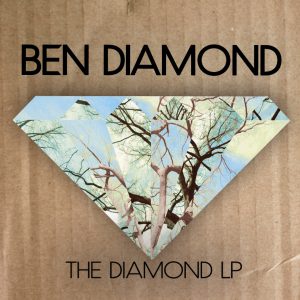 Since last summer we have seen a swift and heavy evolution in the music of young Ben Diamond. His first release, the Bennadict EP, was a home-produced classic that came out of seemingly nowhere. Followed by projects with HHIE favourites Dirty Dike and LeafDog he never seemed to waiver from his laid-back-lean-up flow and beat combos. More recently, however, we see that Mr. Diamond has swapped up Idyllic London town and crossed the pond for the lights, sights and sounds of the City of Angels – L.A… I’m sure there is a good reason for this move, I just don’t know what it is yet.

The Diamond LP is a grand departure from his previous releases and a bit of a bold move. No collabs, no big speaker busting beats…more soulful, tropical, idyllic – both musically and lyrically. Ben has gone from Jehst to Wilderness Crew overnight on the plane to ‘Murica. The man even said himself that he was off to the U.S. to make some more commercial stuff. The album is produced almost entirely by Ben and Aqua. Aqua has himself achieved some notoriety in the past working with some heavyweights in the US game, though in this case I think the pair are both trying something new.

That said, there is no denying he can create some excellent music. ‘Push Forward’ is probably the best compromise between his earlier style and this new direction. Incidentally I would put this in the box of, ‘best track on the album’. The choruses evoke the same thoughts as his first raps leaving you somewhat bemused as to where this voice has come from. Not only that, his vocals have the same laid back feel as his lyrical flow keeping continuation in each track. ‘Why Say Bye’ is another for a heady commute, or a hot evening. The strings, oh the strings, and the lyrics tell the story of this change up where beat compliments flow compliments voice. It is becoming apparent that this was made in what is essentially Summerland.

It takes some balls to not only emigrate but to start switching up your style. I strongly believe that the half of this album I am not supremely convinced by will suddenly make sense as soon as Ol’ Blighty awakes from its arctic slumber. The beauty of this LP is that the better the beat, the better Ben hits it. It’s also excellent to see a young head consistently releasing music, experimenting and developing. I have no doubt that at some point (not too far away) we will see the masterstroke – Opus #1. The beauty of it is that you will have the back catalogue to plot the course and see how it all grew. I see big things on the horizon.

What do you think of News: Ben Diamond – The Diamond LP?