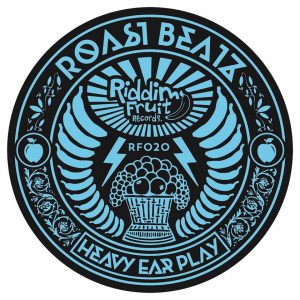 Dropping heat this November (released November 6th 2013), Roast Beatz fondles your earlobes with an E.P. featuring some long standing favourites on the collaborations roster. Having spent some time honing his skills in the studio, mastering his cuts; the result is a clinical boom bap 4 track E.P.

“Heavy Ear Play” shows off the depth of production on offer, taking it down with a slamming laid back beat. Lacing it together come Brotherman, Bronsalino, Billy Brimstone and Big Stig varying flow and cadence while laying down 4 minutes of verbal swag.

RtKal brings a grimey vibe on “Oh Yeh” (Track 2). Good to hear the Birmingham man represent, back in form after some time away.

Shaking things up comes Dabbla, with that unmistakeable clarity in his flow, getting in your face over the top of synth and brass on “Humble Pie”. This gets nominated for the club banger of the E.P.

Synth and brass form the sample soundboard on this little gem. One to be savoured, shuffled up and slammed into your rotation. Purely for that, “Oh, who’s this again?” kinda happiness.

The release can be copped for a mere 4 pounds, or a pound a track. If you buy the whole thing, that’s about 57 pence per artist! Check it out here.

What do you think of Review: DJ Roast Beatz – Heavy Ear Play?