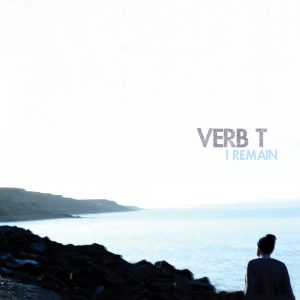 At dawn on 23rd October 2013 (Links follow this review) we saw the release of the seventh studio installment from Mic Veteran Verb T. ‘I Remain’ comes almost straight off the back of his 2012 album ‘Morning Process (Waking Up)’ with a self produced personal showcase, exploring his musings on changing times. On this latest release from the High Focus Hip-Hop blunderbuss Verb T collaborates with only his closest mic companions, garnered over a decade at the forefront of UKHH. Is it even possible to put something new out there so soon after what has been widely acclaimed as Verb T’s best album to date? Reset the clock people, it has happened.

Rolling drums and wobbling organ provide a soft canvas for Mr. T to introduce his latest and greatest opus. Smooth lyrical musings give a window into what is yet to come in ‘All That Exists’, reminiscing on fleeting youthful angst. ‘Dawn’ follows with some crisp sample manipulation, soft enough to allow the lyrics to take the lead, dealing with a failure to launch crisis. If you are looking for a jump up hype album you are, of course, going to be left with a glum face. Verbs allows his maturity, wisdom and social reflection to shine through, excellently.
The title track and first single release ‘I Remain’ is a confident musical biopic depicting that moment of change from angst ridden world hater to the older embracer. Mixing it up with double time bars, switching up the instrumental and verbal rhythms bring a new element to the track. A fore and aft, like breaking through the hectic haze of immaturity and chilling the flump out, retrospectively. Croatia rules.

So, this 15 track orchestral self portrait features only a handful of collaborators from the likes of OG Kashmere, Hip Hop veteran Genesis Elijah and the High Focus mastermind Fliptrix. After having worked with almost everyone throughout the vast expanse of his career, this just shows how intimate the project is designed to be. The Kashmere featured ‘Mummified Remains’ (definite highlight) looks back at their time together at Lowlife records, even with the production taking a Ghostly element to it. ‘Negative Energy’ features a dreadless Genesis doing what he does best with the pair exploring and hitting back at the hatred seen and felt over the years. It wouldn’t seem out of place on ‘I Ain’t Even Charging Bruv’. The Fliptrix collaboration is the hardest hitter of the album, a departure from the laid back ebbing of the lyrical tide seen on the rest of the release… but not out of place.

Now some of y’alls may say that to go it alone is a dangerous move, but with such intimate collaborators this was something different. Taking inspiration from seemingly every preceding project, Mr. Verb T Conning has put a lot of attention on the production making ‘I Remain’ his full circle ‘magnum opus’. With all my aforementioned ramblings in tow this LP becomes essentially the bedroom LP, just nearly 15 years in. Such a minimal team allows for greater creative control, and when you aim to build a masterpiece, keeping numbers down is important. Choosing well is equally essential: Kashmere: long-time collaborator, with whom Verb’s career saw a boost. Genesis Elijah: veteran spitter, and first-time collab (a hint of more to come?). Fliptrix: High Focus front man and good friend of Verbs.

‘I Remain’ not only outdoes the critically acclaimed ‘Morning Process’ but sets a fire under the balls of the High Focus soloist camp to do something special. If he wasn’t there before, since his time at High Focus Verbs has cemented his place at the top of the lyrical penmanship league. “I Remain”: a statement of past, present and more to come. Autumnal Awesome.
“I Remain” comes highly recommended and can be found on CD and in digital format. But if I were you…get THIS. (LIMITED EDITION VINYL LINK)

What do you think of Review: Verb T – I Remain?