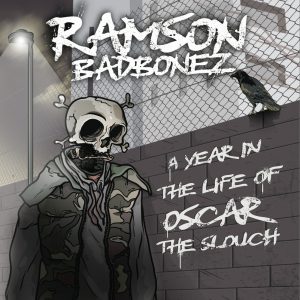 Album: A Year In The Life Of Oscar The Slouch

Ramson Badbonez is a name synonymous with UK Hip Hop, unless you have been hibernating for a decade. He has appeared alongside many a name in the genre; from Task Force, Kashmere and Jehst to Fliptrix, Twizzy and Remus. His last full album “Bad Influence” dropped in 2012 on Boot Records. It was certainly a solid release, as you’d expect from a natural, skilled emcee. However, his new project, a 14-track concept album “A Year In The Life Of Oscar The Slouch”, shines a light on Badbonez’ talent, a light that will have Hip Hop heads talking of little else for the remainder of 2013. That’s not to put a downer on any of Ramson’s former work, merely a nod towards the quality of this new album.

“A Year In The Life Of Oscar The Slouch” is a concept-based album, focussed on Ramson’s views of his world and the people and places that surround him. The album is certainly gritty in terms of lyrics and subject matter, but that is exactly what we were expecting. Ramson has a naturally raw lyrical prowess, and so his style suits the concept and vice-versa. One of the outstanding features of this album, in our opinion, is the lack of needless or exaggerated “swagger” or gung-ho bravado that is often associated with the rap world. Indeed, there are gritty references to city life in most of the tracks (namely “Skatty hood chicks are only good for one thing, dumb young things, buckets and tongue rings” – November (Desperation)), however these references add authenticity and value to the lyrical commentary and imagery, and are not inserted for “shock value”. Charlie Mac deserves big props for his beat mastery in this creation. The beats are addictive and provide a perfect platform for Ramson and his collaborators to weave their words upon – a musical Bayeaux Tapestry if you will.

The list of collaborations on this LP is extensive, and whilst sometimes that is a sign of a lack of cohesion on solo album, this is not the case in “AYITLOOTS”. There is variety in the roster, and fans of UK Hip Hop will likely see their favourite rapper feature on the album. Today’s Top Trumps collection includes: Mystro, Gadget, Jam Baxter, Joker Starr, M.A.B., Balance, Mancini, Jinxsta JX, Genesis Elijah, Fliptrix, Rag N Bone Man and Row.D. Each rapper brings their own style and each has something to add to the overall theme. The mix of tracks featuring collabs and solo Ramson offerings is something that was carefully organised too; 5 of the 12 tracks (excluding Intro. And Outro.) are solo tracks, allowing Ramson to shine through, and showcase his excellent ability on the mic.

Month by month we are taken through the seasons of life. Is it a year or a lifetime? Take from it what you will. There are shifts in lyrical mood and flow and change ups in beat timbre dependent on season. Imagine Oddisee’s Odd Seasons collection smattered with lyrical grit. Sunny July turns autumnal in October, just another facet to the depth of the concept where even the sunniest of beatscapes can support the most dingy lyricism… “Marking your princess for laughing at your expense.”

Here we lay out a selection of tracks from the album.

February (Whateva Da Weatha) snaps your neck with an arsenal of boom bap and features some heavy lyrical rhythms from Ramson and Mystro. March features Jam Baxter on form with a laidback 16 followed instantly by an ever evolving Joker Starr on the same vibe, while July (Foul Moods) is almost the perfect example of that juxtaposition between beat and lyrical content.

October (Oscar The Slouch) features Rag N Bone Man, Fliptrix and Row.D, each of whom bring their own element to the track, providing variety and imagery over the laidback beat.

November (Desperation) has to be a solid favourite on this one. Musically, it is simply fantastic. The sample work is incredible while Ramson adds even more rhythm to an already banging beat. As we mentioned before, the beat is positive, encouraging thorough head-nodding, providing a perfect backdrop for Ramson to contrast with a raw, honest view of street life in the cold, desolate month of November. Ramson paints flawless imagery, and draws the listener in to hang on to his every word. When combined with this excellent 8-bit themed video, the product is perfect. The simplicity of the animation in the video, combined with the grim picture painted by Ramson, and the concoction of video, lyrics and beat is complete. There are plenty of visual nods to other UK Hip Hop groups and albums, as well as classic films in the video too. Watch and listen carefully.

The pairing of Ramson and Charlie Mac has been brilliantly realised and as it turns out, Wordplay Magazine have even done an interview with Charlie Mac in light of his ever increasing release catalogue. It’s a groovy and gritty HD image of a twisted Sesame Street – what’s not to like. High Focus has done it again: a quality, carefully-considered release packed with the UK’s finest. Surely a contender for album of the year. Our tip for top featuring appearance has to be split between M.A.B. and Genesis Elijah.

Feel free to let us know your thoughts in the comments, and be sure to grab the album (out now) from High Focus or iTunes (or ask Santa to bring you a copy on Xmas Day). Take our word when we say you won’t regret it!

What do you think of Review: Ramson Badbonez – A Year In The Life Of Oscar The Slouch?