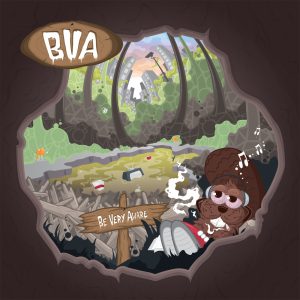 Those following the increasingly healthy underground Hip Hop scene in the UK will have likely encountered BVA in groups like 3 Amigos, Four Owls and most recently Brothers Of The Stone. If these names mean nothing to you, then never fear, but be aware that these are groups producing potent and conscious Hip Hop and are expanding on an already decent fanbase.

Signed to one of the UK’s largest Hip Hop labels, High Focus, comes BVA. He released his first record (Lost But Not Forgotten) alongside Leaf Dog under the moniker 3 Amigos, which he shared with Leaf Dog and producer Naive. Spinning forward ten years to today, and, with plenty of rapping experience in him, BVA prepares to release his debut solo album.

“Be Very Aware”, is the nmemonically named album, weighing in at 17 tracks, 9 of which are solo performances from BVA. Featuring spots go to an array of top UK artists associated with the album’s High Focus Records label. They are Leaf Dog, Fliptrix, Cracker Jon, Sammy B-Side, Verb T, Kashmere, Smellington Piff, Dirty Dike and Rag N Bone Man. A solid list bearing a lot of promise.
Production comes jointly from long-time collaborator Leaf Dog (3 Amigos, Four Owls, Brothers Of The Stone) and Illinformed (Brothers Of The Stone), with one track courtesy of Amdek.

With 10 years of writing, rapping and tearing up stages under his belt, BVA is here to showcase his talent and give us his take on his world and the world around him.

We’ll take you through some of the key features of the album, and give you the lowdown on some of our favourite bits.

From the get go, the mood is set in the Intro with a wildlife soundbyte giving insight into the life of the beaver.

Here in the valley of the beavers, the storm clouds gradually begin building.

This titbit feeds right into the wailing, bass-heavy, head-nodding beat of “Rain Or Shine” which sees BVA immediately stamp his authority on the track with his familiarly hype delivery. BVA talks us through his love of Hip Hop and the importance of being yourself.

I don’t need somebody to be someone that’s someone else. Cos it’s just you, yourself and you, and trust me you ain’t shit, if you can’t be yourself without your crew.

The contrast between Rain and Shine pours through, and BVA comments on the good times and the bad. There is perhaps something for everybody to take away here:

Record my thoughts for my benefit and maybe yours.

The way people change and the vulnerability of people are evident themes echoed in the outro to this, the opening track.

With limited areas in which to emerge, the beavers are now more vulnerable to attack from their enemies.

“Hype Man” continues in the vein of honesty, being yourself, and not acting up to the people around you. An effective nod to the title of the album sees BVA come with more wisdom on the Leaf Dog beat, suggesting that these values are not so easy to stick to.

So if you’re hearing this and fearing this cos you’re delirious with yourself, cut the hype and they might take you serious.

“Frontin’” comes from Illinformed on production. BVA takes a disdainful tone towards people “frontin’”. Acting up to impress or conform, BVA highlights this through his attitude towards these “fakers”, calling them out in the hook.

Are you frontin’? It’s time to call your bluff. Are you for real or do you make stuff up?

“This Love Is Love” is one of our favourite tracks on this album. It’s a real tribute to BVA and his rapping skills, and allows the listener an insight on BVA’s love of his genre. As a Hip Hop head myself, I feel most of these bars. BVA seems like a very chilled, reflective guy, with a real propensity to unleash on the mic, and this track is the perfect example of this. There’s so much to quote and take away from this track (with a heavy beat from leaf Dog), but the hook sums up the mood excellently.

We don’t need the need all the glamour and glitz, cos all you need is a beat and somebody that spits.

“Where’s The Mic At?” brings the first guest spot on the album, coming from Leaf Dog. As has been proved many times before, Leaf and BVA work the mic deftly, and complement each other’s voice and message perfectly.

“It’s A Mad World” sees BVA being less aware, as he and his accomplices try to make sense of the world around them. Fliptrix and Cracker Jon also provide their take on the inexplicable complexity of the messed up world around us.

“Gifted” is another of my favourites on the album. Introduced by a hilarious skit introduction from Dick Trusay (alias of Verb T who partners BVA on this track), the dusty, static-infused beat kicks in and is immediately addictive. The wordplay is tight, and despite the title, the track packs a modest message.

We’re probably misfits, but don’t just use words that fit, it’s concentration, we’re breaking off more than you can spit, cos we’re gifted, in the way we flip that script.

BVA paves the way for Verb T to nail his verse with an extended metaphor on theme of “Gifted” which must be listened to in its entirety to be fully appreciated.

“I Can’t Hear You” was the first track to get the video treatment. The utterly fantastic beat from Leaf Dog has been on repeat for the last couple of weeks. Bassy-heavy and enticing, the beat is laced by the impacting words of BVA, who seems to be telling us how to get back up after life knocks us down.

Learn to get straight back up when you lose your stepping, learn to ignore ignorant perceptions.

Warning, the beat is dangerously addictive!

“Weapon Of Choice” features hearty verses from Dirty Dike and Kashmere. Each rapper presents a different “weapon” to “sooth their mental”. BVA presents his use of weed, Dike takes us on a journey of drinking, and Kashmere leads us on a dark tale through the mind-bending effects of more chemical-induced experiences. Each rapper brings his own element to the track, and the theme is well-maintained throughout.

“Crazy Trips” is the only beat from Amdek, and it’s a real psychedelic, sitar-backed affair; a perfect recipe for a theme centred around drug trips. Both BVA and Leaf Dog offer a light-hearted insight into drug experiences. Both emcees made me smile more than once, and this line from Leaf is particularly memorable (and accurate).

For 3 hours hold down my own conversation – know the meaning of life – then forget what I’m saying.

The album still carries some serious weight in the latter part, with BVA daring to be very open on the insightful track “Am I Going Crazy”.

All in all, the album is very well put together in many aspects. The recurring themes of being lost, finding yourself, staying true to yourself, amidst some drug trip commentary, are well-connected, and it’s easy for the listener to see and enjoy BVA’s honesty. There’s no bullshit on this album – honesty reigns. BVA provides us more than an ample showcase of what he is capable of, demonstrating the quality of “underground” music, and scoffs at mainstream, commercial music. Staying true to his ideals, he proves his own point. His collaborators provide variety and perspective, complementing BVA, and adding to the tight feel that the album gives – in content, production and themes.

The album drops on 14th February, so there’s time to get your order in at High Focus. It sets the bar high for the rest of the year, both from the High Focus camp, and the UK scene in general. Be sure to check out our interview with BVA for some more details on the album.

What do you think of Review: BVA – Be Very Aware?