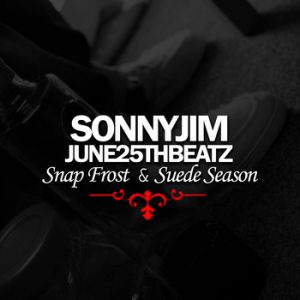 Eatgood dropped this one just over a week ago. Go Eat Good now.

Blurb: “Sonnyjim teams up with producer June25thbeatz for the ‘Snap Frost & Suede Season’ extended player project. This 6 track EP includes features from Eatgood label mate Kosyne as well as the infamous Smokedarg who has appeared on Sonnyjims earlier work in the form of the Trading Standards mixtape. The first single ‘Eating Like a King’ dropped at the start of the year and this is more of the same, Sonnyjim doing what he does best over some more commercially viable sounds provided by June. The project also features an unheard remix for “The Headsplit” joint originally produced by Illmind now turned into a club smasher thanks to June25th.”

What do you think of News: Sonnyjim & June25thBeatz – Snap Frost & Suede Season?