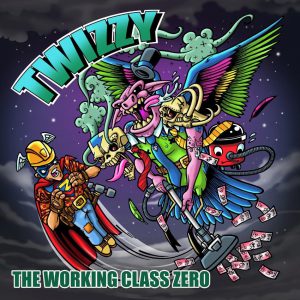 Abnoxshuz Entertainment’s Twizzy dropped a 10-track album today (28/11/2012). Perhaps better known inside his Bristol/London outfit “The Three Headed Beast” who released their debut album earlier this year, . EDIT: Twizzy also has two other solo joints available on his Bandcamp – Bailey’s Brown Musical Vol. 1 & 2
I’ve got it playing right now, and I’m enjoying what I’m hearing. Fluid beats with tight vocals and some catchy choruses, this release features some nice joints.
Notable tracks are the title track, “Working Class Zero”. This track features THB partner M.A.B and the always strong Ramson Badbonez. A track about life, being yourself and “rising up to the occasion”.

Another stand out track comes in the form of “Story Never Ends”, which features his other THB head Jinxsta JX. The track opens with some enticing samples and I was hooked by the opening line: “This ain’t poetry in motion, it’s more navigating rivers to the ocean.” Some deep lyrics set to a night-time video – it all works well.

If you’re feeling this, go grab it for a very reasonable 4 pounds. (As soon as this is posted, I’m off to get mine.) Hit the image below to get it. Don’t miss out on the Three Headed Beast album too!

What do you think of News: Twizzy – Working Class Zero?