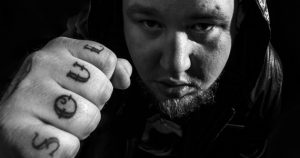 Soulful, blues-y, Rag N Bone Man is a man with a big voice. Having moved to Brighton in 2009 and swiftly forging music-making ties with producer Gizmo and DJ Direct, Rag ‘N’ Bone man’s musical journey took a turn for the interesting when he began collaborating with South coast super crew Rum Committee.

Having signed to High Focus Records in early 2013, the future has changed and fluxed, but ultimately led to Rag ‘N’ Bone Man opening doors to a whole series of exciting and groundbreaking musical collaborations, both live and on wax, which glimmer brightly on the horizon. Collaborations aside, 2013 is set to be the year that Rag ‘N’ Bone establishes himself as one of the most forward-thinking and technically gifted blues singers in the United Kingdom.

What do you think of Artist: Rag N Bone Man?