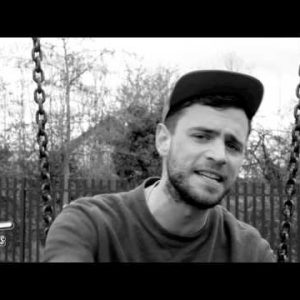 Despite having only a handful of tracks floating around on the internet, one of Contact Play’s somewhat “quieter” members, Edward Scissortongue, is set to release his debut album ‘Better Luck Next Life’ on High Focus records in the next couple of months. Hip Hop In English caught up with Ed to discuss the essentials. If you don’t know who Ed is, or you haven’t had a chance to check him out, take a look here or watch these videos. You won’t regret it!

How long have you been writing?

I have been writing for fucking ages. I first whacked a pen on a page to write a bar thirteen years ago. That bar was rubbish, as were the 15 after it. I would say that writing is the only thing I am decent at, but that would be a lie. I am also well sick at keepsie ups and ruining parties by being too drunk and breaking stuff and falling over.

How did you get into it?

I got into writing because I saw the likes of Skibadee and Stevie Hyper D tearing up Drum and Bass raves and getting all the girls and having massive zuts handed to them by gurning crowd members. I thought ‘that is the spot’, so I started writing lyrics like ‘Superman, Spiderman, Conan The Barbarian’. Drum and Bass is painfully limited, so I turned my attentions to hip hop as there is limitless potential. That is what I have been doing ever since.

What/who influences you? Where do you believe the imagery comes from?

This is both a tricky and incredibly easy question to answer. I guess I am inspired by a bunch of stuff each and every day that I either do or don’t take notice of. This weird mash of information seems to bubble to the surface and present itself when I sit down to write a bar. I rarely sit down with a pre-meditated concept for a verse/track/album. I just sit down and listen to what my brain seems to want to tell me. Sometimes this process is long, other times it isn’t. It is growing less and less long the more I write. I have a lot of faith in what my brain says to me, no-one elses brain speaks in the same way as mine – this is a concept that I run to the hills with.

How do you structure and build your bars?

Phonetically. But not all the time. I find it insane how structuring words into sentences can paint pictures in my head and vice versa. So long as those pictures are potent in my skull, then I have every confidence in the bars.

As evidenced on your blog, your taste in music extends far beyond hip hop… How far does that extend?

I sing bare in the shower. I am singing a shit load of Bryan Adams at the minute. I met him recently – he is a G. I am just a fan of good music. I couldn’t care who it is or what it is – if it sounds good in my ears then I am down with it. I love pretty much everything; from filthy US hip hop, all that stuff about chains, cars and guns, I love it, to Nine Inch Nails and Deftones – that is good cycling music. You name it – I blatantly love it.

Have you ever attempted to break into other genres? Can we expect to see an Ed Scissor acoustic album in the future?

I can’t play the piano but I like playing piano and have plans to invent a new genre of music called ‘Superpop’ – watch this space.

Lyrically, I am inspired by good songwriters. I don’t listen to hip hop when I am writing as it messes with my head. I like listening to accomplished songwriters, people that paint vivid pictures with lots or few words. From Robin Pecknold to Nancy Sinatra to Frank Ocean to Bon Iver to Mick Jagger. If it is dope then I will listen to it obsessively.

What is your take on a site like this where we are attempting to build a database of UK hip hop lyrics? Do you think that having readable lyrics are an important aspect of this particular genre?

I think it is an impressive effort. Big ups!!!

What was it like working on your album? It was done with High Focus so we can only imagine there will be a video and all that. Can you share any other information?

My album is out in August (I think) on High Focus Records. I am knee deep in a second record but that is still all over the place. My debut was (and still is) a thorough undertaking but I am hyper proud of what I have put together. Working with one producer (big up Lamplighter) has resulted in a really coherent piece of work – here’s to hoping the people like it. I like it, that is for sure.

Contact Play, High Focus, Arsene Wenger, Robin Van Persie (please stay) and EVERYONE ELSE WHO I LIKE TOO – you know who you are.

– Thanks Ed. It’s been a pleasure. Props to ya! Best of luck with the album. We look forward to getting our hands on it, and penning some lyrics! Respect.

Keep checking back at hiphopinenglish.com for more info on his upcoming album.

What do you think of News: Ed Scissortongue – Exclusive Interview?