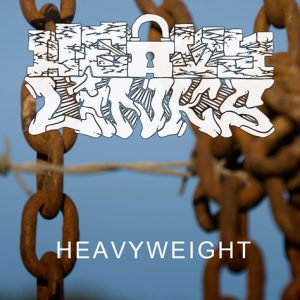 The release weighs in at 8 tracks of all killer no filler Hip Hop. Featuring artists are Grand Imperial Cappo, Verb T and The Book Thieves. All the guest verses merge nicely with the feel of the release. That is, they provide a touch of variety but don’t overshadow the Heavy Links heads.

The album opens with “Closing Down The Show” and sets the stage for things to come.


Long range free-kick, I’m hitting harder than Kolarov, when Donnie drops some bombs you can’t compete with the monster squad.

“Just To Let You Know” sports Verb T, and the beat instantly sucks you in – laidback but heavy at the same time, allowing Verbs to open with typically effortless flow.


Donnie man, this shit’s just cruelty – Heavy Links, I don’t mean Slick Rick’s jewellery.
Interrupted only by a sumptuous hook, each MC paints pictures with his words. This beat has to be my favourite of the whole release.

“Follow This” features a violin melody over the boom bap backing.


Decoded in the cortex, all the frequencies are complicated, oscillating atoms are more complex than we estimated. Left side and the right side of the brain they keep separated, trying to balance concepts and emotions, leave and elevate.

“Nuclear” features Cappo, and this is the first track to receive the video treatment. Check this one out below.

Leaving you a couple of surprises, we’ll finish by saying that if you like your boom bap with intelligent lyrics, you won’t be disappointed by this one.

We’ll leave you to listen for yourself below. As always, if you’re feeling what you hear, go grab the album. Heavy Links have a Vinyl version and a digital version (which comes with whichever option you choose). You can grab a T-shirt, fridge magnets and Donnie Propa’s mixtape too. See what’s available here.

What do you think of News: Heavy Links – Heavyweight?